Odes to the prince – the story 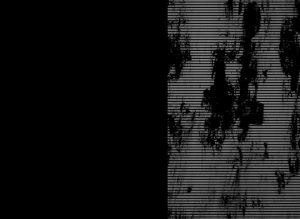 video still from “odes to the prince” (by Danae Syrrou)

“Odes to the prince”, a number of musical interpretations of poems by N.A. Aslanglou’s same poetry collection, began as a short performance during the 1st sound acts festival, which was organised by the FYTINI family, and took place in TV control center (KET) in Kypseli, Athens, in April 2015. Up until then, my only work on Aslanoglou was “gi’aytous” (for them), which is one of the tracks of my second album, “still life with improvisation”. I still remember that after the performance, in a short conversation Ι had with Dimitris Alexakis, one of the people running KET, he was the first one to propose that I should evolve the performance into a full show. I loved the suggestion, and after asking two of my friends, Stamatis and Tina, who also thought it would be a good idea, during the next day we began planning it with my beloved Danae Syrrou, who agreed to create original video works for each poem. Through countless hours of rehearsals (I have recorded more than 200!) and various shows, the idea constantly evolved, sometimes became longer, sometimes shorter, until it came to its final form in 2017, when I finally felt that I had achieved the balance I wanted among its three axes: the music, the performance, and the video. 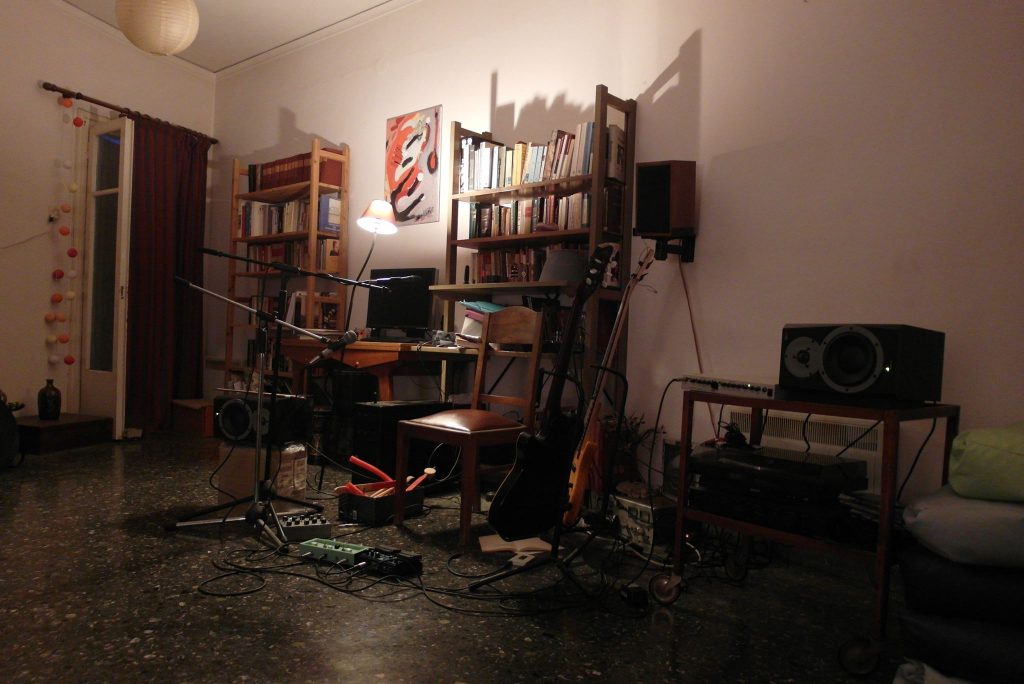 Early setup for “odes”, before a public rehearsal at my place

And at this point, sadly, I had to stop, because my continuous, mostly failed, efforts to communicate with spaces and festivals outside Heraklion, had really tired me and I felt that, after almost two years, I needed to begin working on something new. We performed the show for a final couple of times in Heraklion, and I decided that it would end there.

Like in every aerostat concert, at the center of the “odes” was, apart from the spoken word approach, the creative, and sometimes completely weird, use of musical instruments and various objects on stage. Therefore, for the final few shows I carried with me: one guitar, one bass guitar, one looper, three effect pedals, one noise generator, two microphones, two shoebrushes, two radiator pipes of different sizes, two different sets of chinese meditation balls in different tuning, a bow, a portable megaphone, a harmonica, a pair of chopsticks, a few pieces of wood from a broken shutter, a single-stringed instrument made from a can, and a decorative wooden flower, that I sadly have misplaced somewhere now.

Using the exact same materials, I built the album that will be published in the next few days, both as a reminiscence of these performances, and because I believe that the compositions deserve to be listened to by the people who didn’t have the chance to do so until now. I mixed the whole album myself for the first time, trying to restrain myself from meddling with the music too much, so as not to lose the feeling it had during the live performances. But I did take advantage of the stereo sound, which, due to technical reasons, was not possible during the performances, some better quality effects, and I shortened the durations, so that the compositions do not sound too long without the videos and the performative aspect. In all other ways the music, the style, the structure, and the development are exactly the same.

I’ve already written too much. The album, as I already said, will be published sometime this week, in digital download form, and for the first time I will try to cover my expenses with voluntarily donations, minimum 3 euros (for the complete album download, plus one of Danae’s video works). I hope that you if you like it, you will support it. Streaming will, as always, be free of charge.

(P.S. The album has been published and you can find it here!)